Showing posts from 2019
Show all

The Home of the Brave 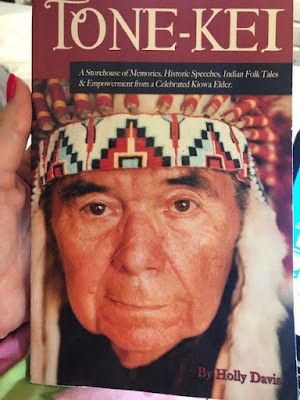 I was watching a show on Netflix called, The West last night with my husband. I was so full of emotions because I am North American Indian, Potawatomi and Chippewa Cree from Turtle Mountain. I have such a connection to the land and my people without ever having direct relatives teaching me the ways. I was fortunate to have a family friend that I called after my mother died that was a legendary American Indian Elder. His name was Tone-Key, pronounced "Tonkey Eye." His daughter and my mom were best friends, and as fate would have it, they died within a year of year other. When I called him, after finding his number in my mom's phone book, I just wanted to send my condolences, and I desperately needed more connection to my mom, my people, and myself. I was pregnant with my fourth child, and I woke up in the middle of the night with this profound feeling of loss. It wasn't just the loss of my mother, albeit, there is none more significant. I felt a loss of a part of myse
Post a Comment
Read more
More posts

Holls
I am a counselor, and mother of 5. I have Masters degree in Mental Health Counseling. It gives me a chance to do what I love most; write and learn about people. I love people. I am pretty passionate about life, as you will see. I am busy, but I have to drain life of every ounce. I am working on my Ph.D in Human Services. I would really like to make a change in mental health services. Perhaps less folks on the streets, and more humanity with treatment. http://www.lifecoachholly.com to book appointments or call 702-626-9400.